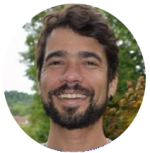 This seminar series offers a set of empirically novel data that can lead to revisions and refinements of our models of the phonetics-phonology interface. Specifically, they demonstrate that the overall phonological structure of a given language system can influence that extent to which particular phonetic cues are recruited to enhance perception, and that contrarily, the perceptual robustness of particular cues can influence the shape of phonological distributions. Data from the Maxakal´ı spoken language and from a village signed lan- guage within its community will form the core of two blocks of lectures, both of which are intimately related to the diverse ways that the same elements may serve distinct roles of dispersion and contrast, depending on the nature of the underlying system.

We propose that contour nasals such as [mb,mb] come from three principal sources. One source, articula- torily driven, comes from underlying voiced stops, as nasal venting in order to sustain voicing. The other, perceptually driven, comes from underlying nasal consonants, as shielding next to contrastively oral vow- els. Although both of these first processes are phonetically well motivated, we argue that the contoured allophones specifically arise in languages in which systemic or phonotactic restrictions allow for easy re- coverability of the corresponding underlying segment. Finally, we present a few cases of contour nasals in preconsonantal contexts that seem to be neither venting nor shielding, and suggest that these arise due to place-of-articulation enhancement in clusters, arguably behind intrusive nasals in cases like Spanish rambla (< ramla). We offer diagnostics for distinguishing nasal venting from shielding and present case studies from South American languages in which understanding such phenomena as enhancement involves analyt- ical commitments to what is contrastive in the language. We then present a maximum entropy model of loanword adaptation for nasal harmonization in languages that borrow from Portuguese, which has nasality but with no onset-vowel dependencies.

Lectures 3-4: Contrast and Dispersion in Handshapes in a Village Sign Language

We provide an analysis of the distribution of handshapes on the dominant and non-dominant hand in the incipient village sign language found in the Maxakal´ı community in Brazil. The most frequent handshapes reflect tendencies in choosing from the crosslinguistically unmarked set of handshapes, and are particularly well-suited to quantitative analyses of handshape complexity found in models such as Ann (2006) and Brentari (2003), in addition to favouring a core set chosen from the most maximally dispersed handshapes. This in fact suggests that emergent sign languages, no matter how young, show quantitative correlations between token frequency and articulatory complexity, despite tendencies that they may have otherwise to be iconically referential. We demonstrate that these trends hold for the non-dominant hand as well, an element of sign language phonologies with no analogue in the spoken domain. Finally, we demonstrate how allophonic thumb extension can be understood as contrast enhancement in signed languages, leading to a visual analogue of acoustic prominence.

This website uses cookies to improve your experience while you navigate through the website. Out of these cookies, the cookies that are categorized as necessary are stored on your browser as they are essential for the working of basic functionalities of the website. We also use third-party cookies that help us analyze and understand how you use this website. These cookies will be stored in your browser only with your consent. You also have the option to opt-out of these cookies. But opting out of some of these cookies may have an effect on your browsing experience.
Necessary Toujours activé
Necessary cookies are absolutely essential for the website to function properly. This category only includes cookies that ensures basic functionalities and security features of the website. These cookies do not store any personal information.
Non-necessary
Any cookies that may not be particularly necessary for the website to function and is used specifically to collect user personal data via analytics, ads, other embedded contents are termed as non-necessary cookies. It is mandatory to procure user consent prior to running these cookies on your website.
Enregistrer & appliquer